by Avinash Singh
Astor Legal
Your LinkedIn Connections
with the authors

The phrase 'Daylight Robbery' has been in the English lexicon for hundreds of years.

But its origin is far removed from the meaning of the phrase today.

What Does Daylight Robbery Mean?

'Daylight Robbery' is a figure of speech to describe an unfair trade that is so clear and obvious that you could have robbed the victim in broad daylight.

However, the meaning of the phrase has evolved over time.

When it was first coined, the meaning of 'daylight robbery' was literally that daylight was being stolen. This may seem strange, given that daylight cannot be stolen.

Well, a certain British Monarch had other ideas.

What is the Origin of Daylight Robbery?

The phrase 'Daylight Robbery' first came to prominence in the 1690s, when King William III was in dire need of money. Having exhausted all other options, he and his advisors devised a tax whereby houses with more windows would pay a greater amount of money.

Because of this, people would board up their windows to avoid paying the tax. This of course meant that there would be less daylight coming into their houses. Hence the phrase, 'Daylight Robbery'.

What Was the Window Tax?

The 'Window Tax' was a tax devised by King William III in the 1690s. It was levied on the windows or openings of a building.

The more windows a building had, the more tax they paid. It was essentially a progressive tax whereby the wealthier member of society paid the most as they tended to have larger houses and more windows on those houses.

Indeed, many rich individuals took paying the tax as a badge of honour. The greater tax they paid meant that they were seen as having more wealth and status. In fact, some houses were built with more windows for that specific purpose. 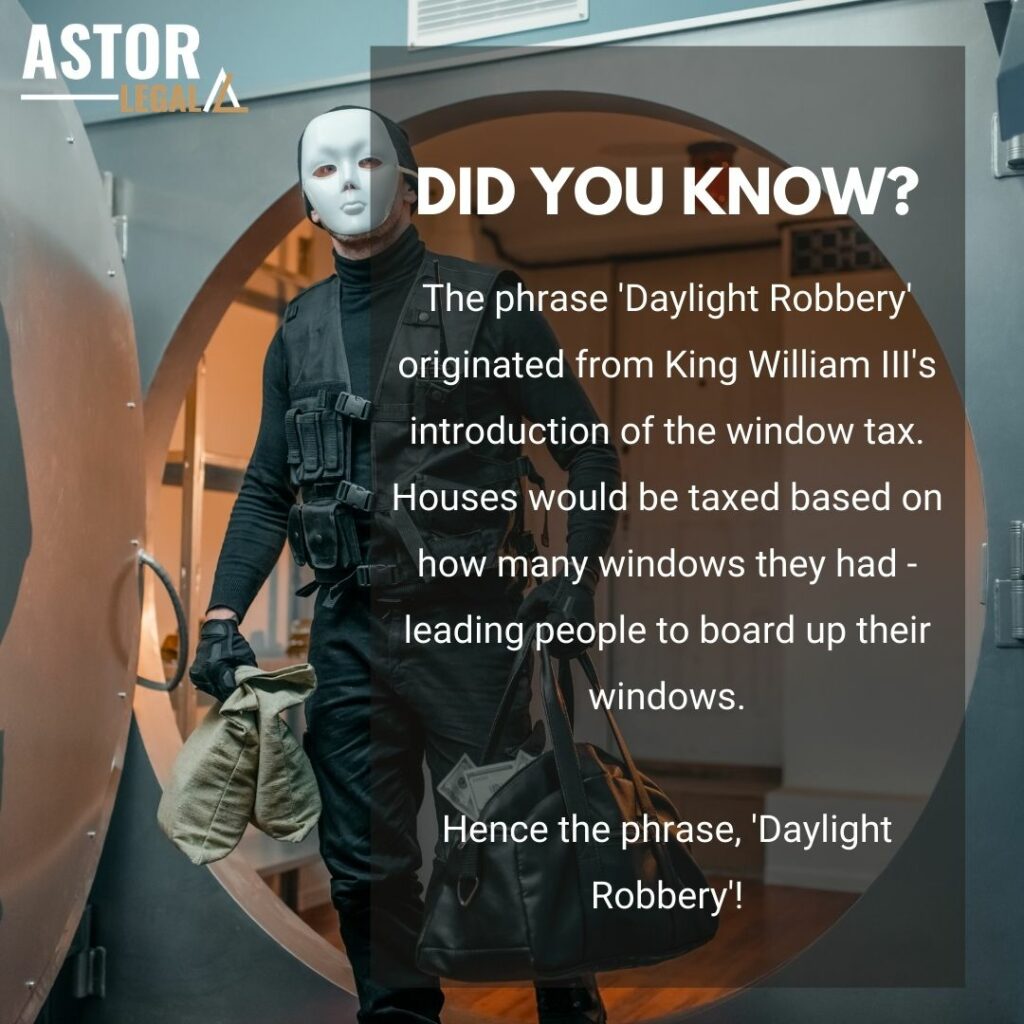 Of course, there were also countervailing thoughts at the time. Many people chose to build houses with fewer windows. Some even took to covering up windows that previously existed to avoid paying the tax. These buildings still exist in some parts of England to this day, as the image above shows.

The Offence of Robbery

Modern incarnations of the saying, "Daylight Robbery', are used in a more figurative sense. Generally, one would think a robbery would be committed surreptitiously, under the cover of night.

However, to commit a robbery in daylight would be particularly brazen. Even the best criminal lawyers for robbery would struggle to come up with a reasonable defence.

The definition of robbery is "the use of violence to steal property from another person" and is contained in Section 94 of the Crimes Act 1900 (NSW).

For you to be found guilty of a robbery charge, the prosecution must prove, beyond reasonable doubt that you took property from the alleged victim, had the intention of stealing and used violence or threatened violence to obtain the property.

If the Police fail to prove any of these elements beyond reasonable doubt, you can be found 'not guilty' and the charge will be dismissed.

This is a strictly indictable offence which means that it must be finalised in the District Court, whether you plead guilty or 'not guilty'.

There are also defences available for this offence, such as 'claim of right'.

In conclusion, the phrase 'Daylight Robbery' today has a much different meaning to its original manifestation. Given the etymology of the phrase, it is perhaps unsurprising that its meaning has changed, given the window tax has long been abolished.